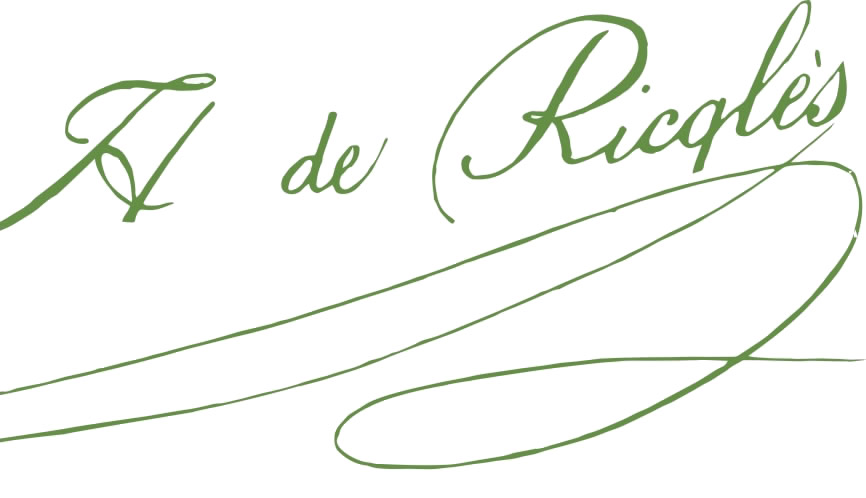 The wonderful story of RICQLÈS peppermint extract began some 180 years ago in the south of France.

At the beginning of the XIX century Heyman de RICQLÈS was a young silk trader with a passion in botany. He started by studying mulberry leaves, which are food for silkworms, then he developed a special interest in Peppermint (Mentha Piperita) that grew in Provence not far from his home.

When he understood the beneficial effects of this high quality mint, he engaged in research to extract its wonderful properties. Heyman de Ricqlès succeeded in isolating the active ingredients and extracting a very high quality natural essential oil, through a water steam distillation process of the peppermint leaves.

Then through various manipulations and the addition of alcohol heated at high temperature, he succeeded in keeping intact all the properties of peppermint essential oil.

In 1838, Heyman de Ricqlès invented the original formula of RICQLÈS Peppermint Extract, with a production process that is kept secret and unchanged for over 180 years !

This extract of high quality mint was first meant for the personal use of the Ricqlès family who loved its fresh, strong and minty fragrance.

In 1840, the south of France was affected by terrible floods. Heyman de Ricqlès decided to help and generously distributed his peppermint extract to a great number of people.

Following these events, the King of France Louis-Philippe 1st personally handed Heyman de Ricqlès a medal of honour for his examplary role.

This event significantly spread the recognition of RICQLÈS Peppermint Extract. 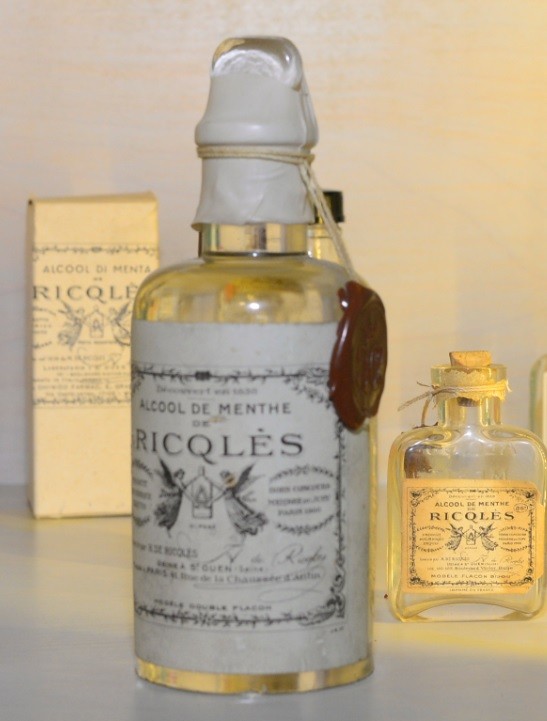 At that time, it was sold in pharmacies in the form of small sealed glass bottles and it was mainly used as a hygiene product.

In 1849, Heyman de Ricqlès registered the patent related to his invention. 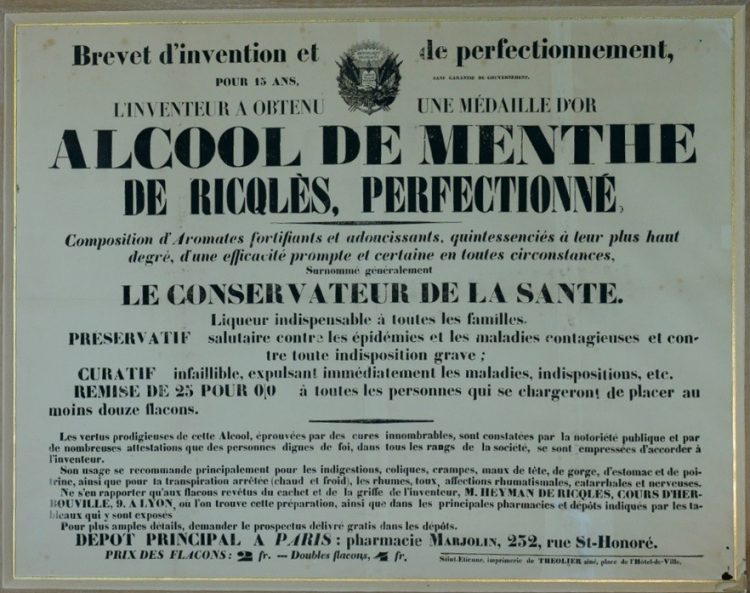 He died on 14 December 1853, and his three sons Louis, Edouard and Vital decided to take over the family business. 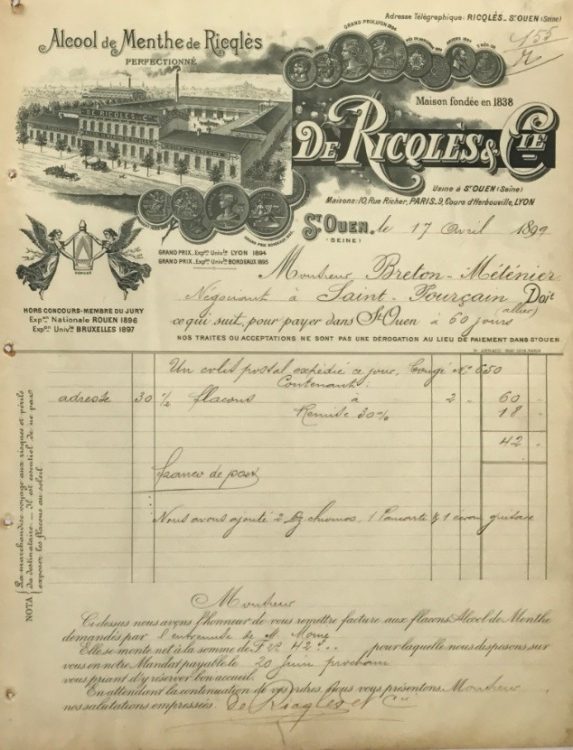 In 1857, they registered Ricqlès peppermint extract trademark, and in 1869 the heirs of the inventor created the ‘De Ricqlès et Cie’ company to develop its marketing activity.

In 1898, under the management of Louis de Ricqlès, the success rapidly went beyond the regional boundary. The company moved production to Boulevard Victor Hugo at Saint-Ouen sur Seine near Paris.

It was actually at the beginning of the 1900s that RICQLÈS Peppermint Extract acquired its international reputation and its iconic French trademark status.

At this time many advertisement campaigns were created, especially the famous slogan ‘RICQLÈS the strong mint that comforts’ that many people still remember.

In 1914, during the First World War, the French Army decided to add a bottle of RICQLÈS Peppermint Extract in the packages of soldiers.

The distribution of RICQLÈS Peppermint Extract in French Colonies and throughout the world contributed to increase the reputation of RICQLÈS as an international trademark.

In 1945, after the Second World War, the heirs of the Ricqlès family wanted to diversify their historic know-how based on peppermint. They launched the production of breath mints (“Freshness on-the-go“).

In the 1950s, RICQLÈS had great success with the French, and the brand took part in several consecutive years in the cyclist Tour de France. Jacques Anquetil -the first five-time winner of the Tour de France- praised the virtues of the product in an advertisement claiming that he used RICQLÈS Peppermint Extract “During exercising, and after “.

In the 1960s, the inimitable freshness and wonderful flavor of RICQLÈS gave rise to a wide range of new products: products for fresh breath, sweets, chewing-gums, sprays, etc…

In 1987, Haribo France (French subsidiary of the HARIBO German Group, European leader in sugar confectionery) took over the RICQLÈS trademark.

The production of RICQLÈS Peppermint Extract was moved to Uzès, at the gates of Provence, close to peppermint fields.

In 1996, a museum dedicated to the RICQLÈS trademark was opened near the production site. It welcomes close to 300.000 visitors every year.

In its 180 years of existence, the packaging of RICQLÈS Peppermint Extract has changed over time, but its secret formula remained unchanged since its invention.

Nowadays, the reputation of RICQLÈS Peppermint Extract continues to spread in many countries to “Refresh the world” ! 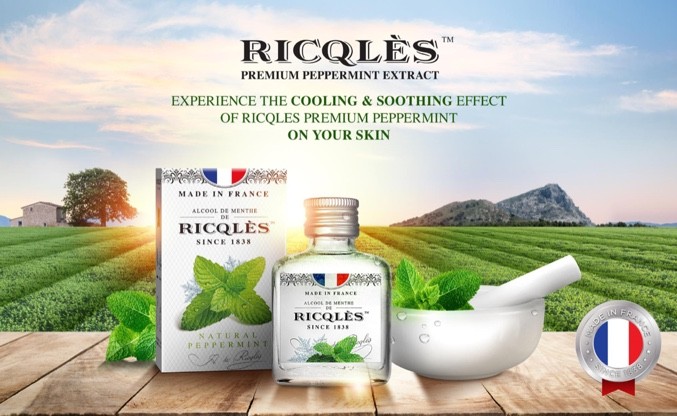 Since 1838, RICQLÈS Peppermint Extract is made exclusively in France according to the original recipe. Beware of fake products !